The drive here was not as breath-taking as past drives. It was still beautiful, in patches. I thought the mountains were hilarious, because they look exactly like the mountainous landscape on a map. I would describe it as a green carpet draped over a mountain range.

We past acres upon acres of farmland. It was cool to see varieties that we can’t grow back home like olives, almonds, pomegranates, and walnuts. We stopped at a very nice gift shop/food stop/hangout on the way. This place was AWESOME, I wish I had pictures of the inside but I left the camera in the truck. The gift shop was huge with tons of local products. But the real gem was the courtyard. It had a 4-story treehouse that was so amazing. I’m so jealous I didn’t have this thing growing up! It was so cool that I took a video as I wandered though it.

We bought the National Parks Season Pass before we left for this trip which was so smart because it has payed for itself already. We also purchased this GoodSam Atlas, on our last long trip, and it has really come in handy. There has been a number of occasions where GPS lost signal and we didn’t have cell service either. It’s reassuring to have a back-up plan.

So far in every park the first thing we do is always go to the visitors center. It is always chock-full of useful information and wonderful park rangers to help plan the best things to see. When you have such a small period of time to enjoy the parks, like we do, it is great to be able to have the advice from a person who is there everyday. We didn’t get to the park until 5pm on our first day, so we didn’t have time for much. We decided to see a live theater presentation about the Buffalo Boys presented by Park Ranger, Shelton Johnson. We really wanted to do a night star gaze with a ranger but the time conflicted with the theater. We didn’t have time to go on a hike before the show so we grabbed a bite to eat. It was Sunday so the only available restaurant was the cafeteria. I’m not a fan of that, but it was that or nothing so I had a hotdog, and it was good. On the walk to the cafeteria, there was a bear, really a BEAR, and it was extremely close to humans! It was 20 feet away from people walking on a path, it was crazy. There was a Ranger with a tranquilizer gun holding back the crowd of people gawking, but the bear was right there! Like at the zoo, but without a moat and fence to keep you from getting mauled! Actually, the bear looked really nice and probably has no aggression because it lives in such a beautiful place and, unlike a zoo, can go where ever the hell it pleases.

After the quick meal we power-walked back to the theater, getting there just in time for the show. But first, walking up to the theater, there is a display of a replica Native American town, complete with teepees, huts, and animals. Well at least I thought the animals were fake. There was a deer just posing in the town, standing straight up posing. I could have sworn he was fake, because he was just perfectly placed and flawless. Then he moved and started walking toward us. It was like some Disney animatronics as he slowly approached us. I was, almost, waiting for him to start talking. These animals are too friendly for there own good, first a bear and now a deer. And the squirrels are OBESE, waddling up to people for more food.
Don’t feed the animals! 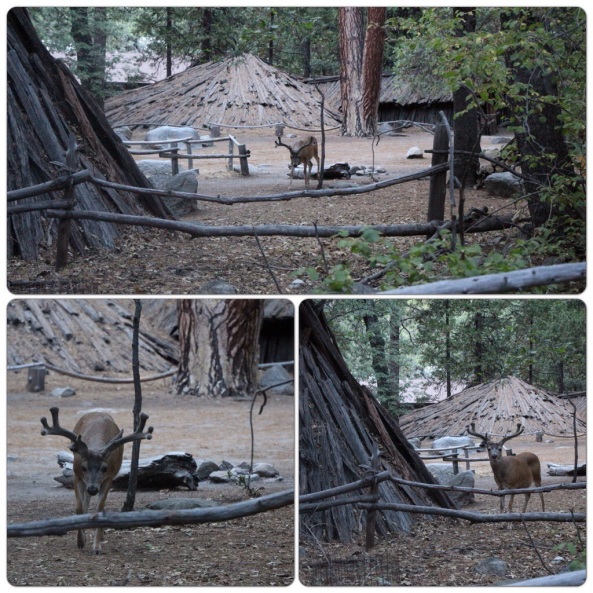 The theater presentation was a film about the Buffalo Boys, which were Black men who served in the military that were stationed in Yosemite to protect it. Not a bad deal, if you ask me. Before the showing, the ranger who wrote and stars in the film came out to tell us about himself and why he is so passionate about this “forgotten story.” Well hearing him speak, you are made to believe that this is a story about oppression and sadness and will discuss their role in doing great things for the park. However the film doesn’t actually go into any detail about what they accomplished to better the park. The films soul focus is on the main character and what he remembers of his childhood in the south. Blacks were treated poorly in the south at time and he was made to think that he would not amount to anything due to comments and actions of White people in his town. Then he joined the army and fought for our country among the White man and had equal pay. All Blacks were assigned to later protect the park because they were the first available, close to 500 men. These men were extremely lucky to be given this assignment, it was an easy assignment…away from the war with equal pay.
After the film I honestly didn’t understand it’s purpose. I wish it had talked more about the other things they did for the park, like make the first trails or discover new things. It will air on PBS soon and you can judge for yourself, maybe I need to see it again to get a better appreciation.

On the 2nd day we drove to Toulumne Meadows which is about a 2 hour drive from our campground. It was a beautiful drive through high pine forests, there were steep cliffs, and amazing views of the Yosemite Valley below. We stopped at Tenaya Lake for a photo shoot and Jacob vowed to come back for an after-hike swim. 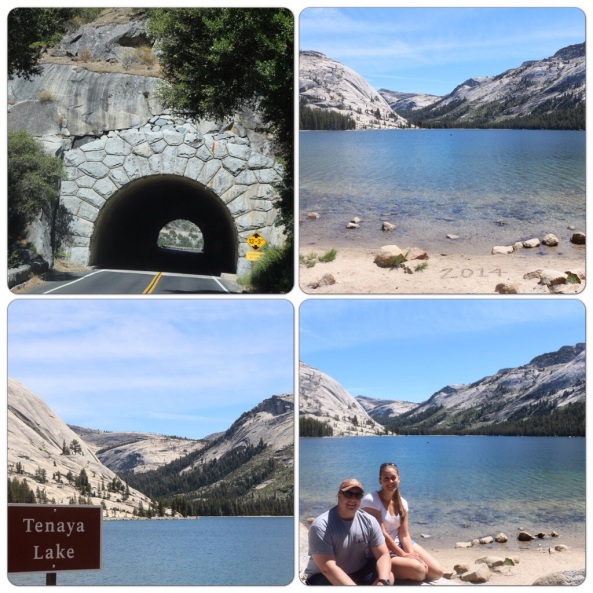 Upon arrival we stopped at the Visitor Center for some Ranger advice. She suggested a short, but pretty steep, trail up to Lembert Dome and continue to Dog Lake. We took her advice, but the first stretch of the trail we were suck’n wind hard. It was steep, stair-master style, and the low oxygen level wasn’t helping. We hiked straight to Dog Lake first, because once we got to the fork to either continue up or begin a more level path our body’s made that decision for us. Please keep in mind that we have been hiking/walking our butts off everyday up to this point and we were just dog tired. On a normal trip this probably isn’t even a hard hike. The stretch of trail to Dog Lake was a blessing with a gorgeous view of a lake with a mountain backdrop. After taking what seemed to be 100 photos and basking in the beauty we headed back toward the Lembert Dome Trail. Our thighs were thankful that we broke up the trail in this fashion, by the time we reached the steep inclines they were rejuvenated and ready for action. In the end, reaching the summit was totally worth it, it was spectacular! 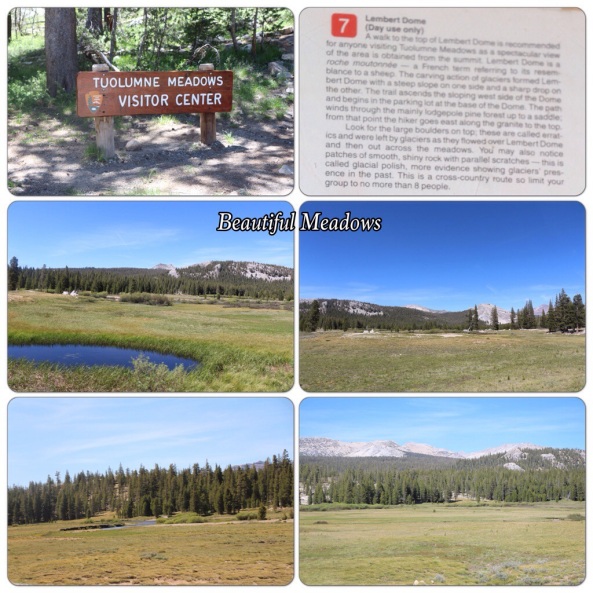 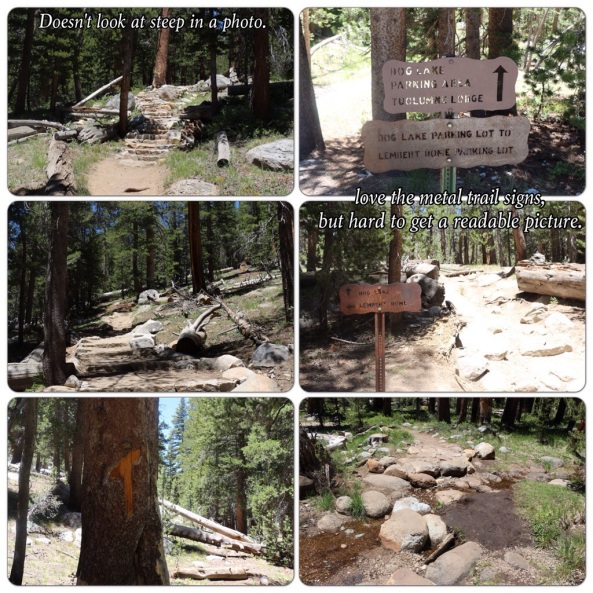 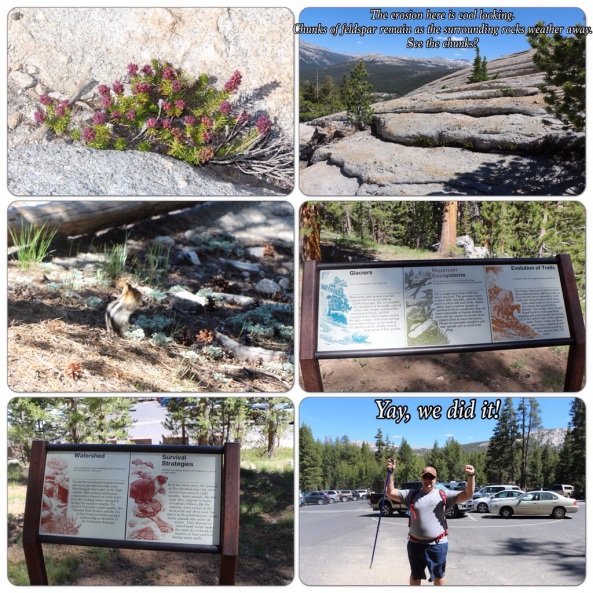 After the hike we headed back to the lake for a swim. It was too cold for me so I just watched. Even staying on the beach was cold, it was so windy! He didn’t stay in long, just long enough to cool off. Then it was time to drive back to the campground.

Jacob had to cook something this trip! Our neighboring campers, from Quebec, said the smell reminded him of something he ate while in New Orleans….you don’t say, hmm, fancy that!

On the 3rd day we went back into the Valley to see some of the waterfalls and main attractions. This park is ridiculously crowd, by the way, parking and riding the shuttle is the best option. I didn’t really care for being in the Valley because of the crowds, it was just too much. We were thankful that someone told us to go to the Meadows, and we listened, it was peaceful. We decided to see the stuff that you can drive to, opposed to taking the shuttle. The first stop was Glacier Point, with a easy walk to the point. Great spot for killer pictures! Then we drove to Bridalveil Fall, with another easy walk from the parking area. Then we drove to Sentinel Beach and it was bitterly cold. By then the park was pretty full, we had enough of the traffic, and decided to head home. Beautiful Park but man-oh-man it sure is popular! 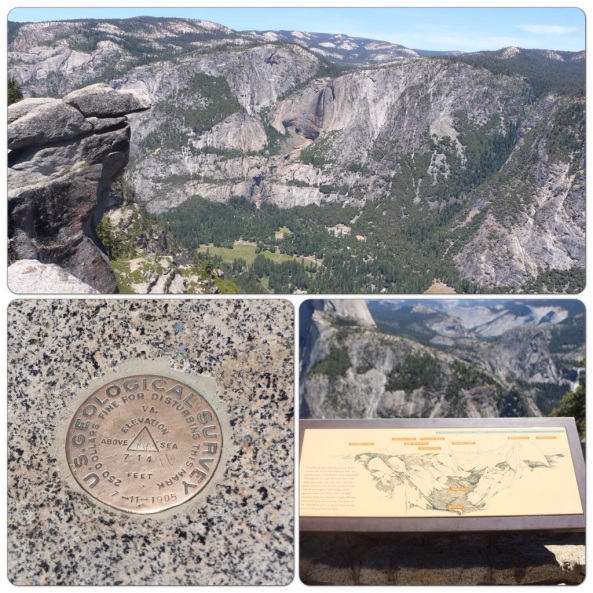 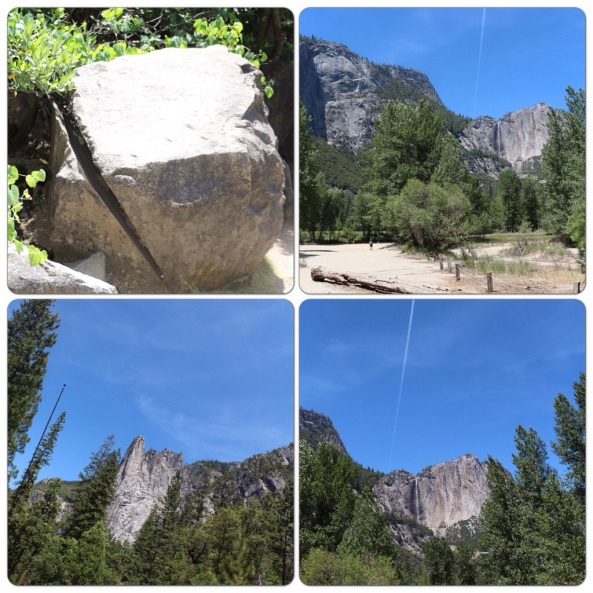