The drive was, of course, AMAZING! To get to Springdale, UT we had to drive through Zion National Park. It’s a very windy road with a lot of switchbacks and 2 tunnels. The pavement, which was just black-top driving up to the park, was red inside the park, which we thought was cool. What we thought was not cool was the addition charge for our vehicle to pass through the tunnel. We missed the cutoff by 4 inches, Com’on man! The charge was for a “Ranger escort through the tunnel” however they only allow one side of traffic at a time, regardless of size, so what was the point of the charge? No clue…because we didn’t get a “Ranger escort.” 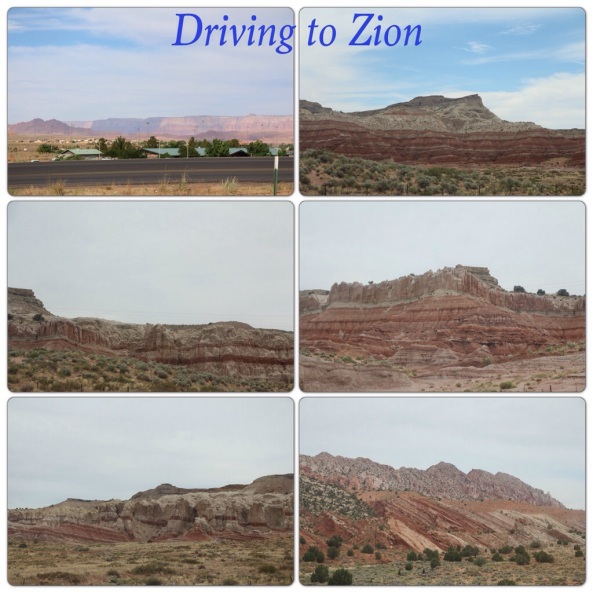 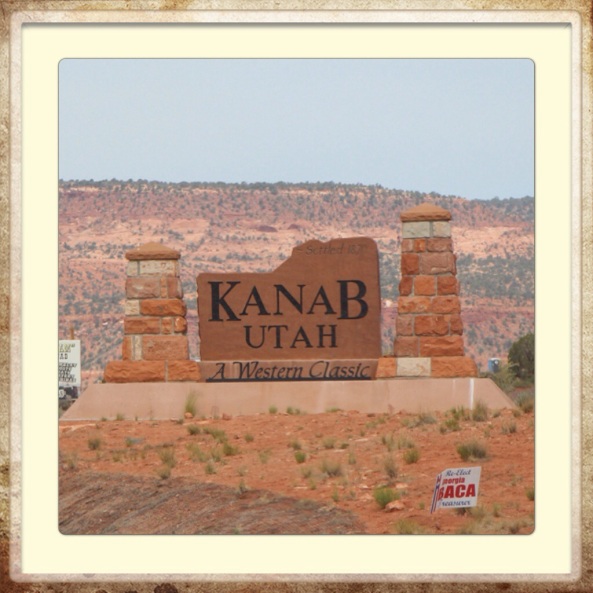 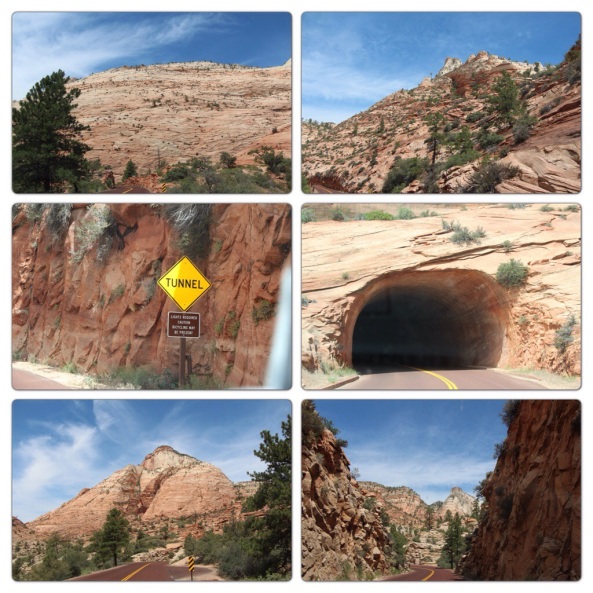 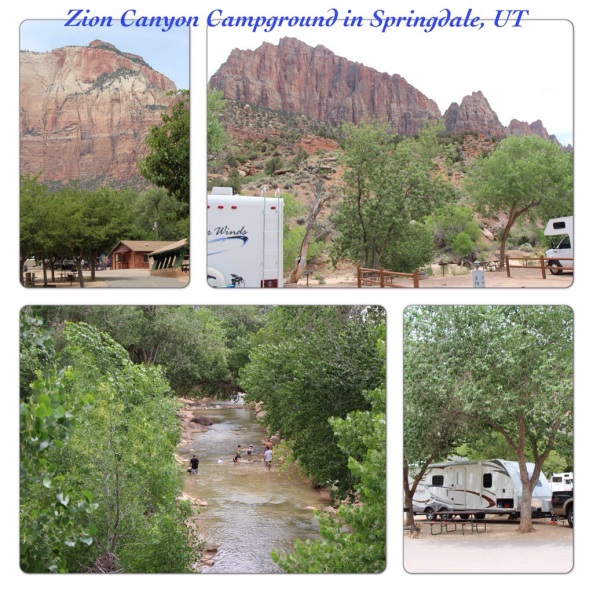 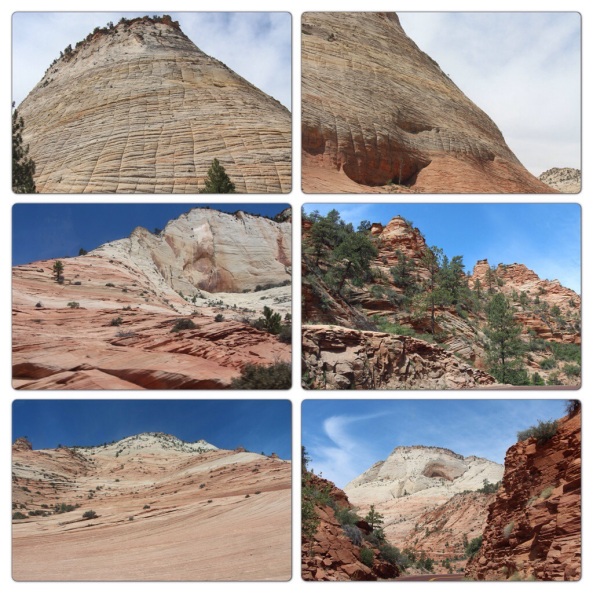 The first thing we did after we setup the camper was go to the IMAX movie about Zion for $5. The movie was filmed in the 90’s and could really use an update. The colors were horrible and the picture was fuzzy. I expect more from an IMAX movie, like at the IMAX in the Aquarium…everything I have seen there has been spectacular. On a positive note, the movie gave insight about the history of the area’s discovery by humans many moons ago. Basically just the stories Native Americans have been telling for years and how not to disrespect the land because it is haunted.

After the movie we hopped on the shuttle to get in a hike before dark. We hiked upper and lower pool and the Grotto. There is no parking lots in the park, you take a shuttle in from town, then you take a park shuttle to everywhere you need to go. It’s pretty awesome! The shuttles run constantly, we never had to wait more than 5 minutes. Because of traffic issues a propane-powered shuttle bus service was added in 2000.

Zion is considered the Disney World of the National Parks and it is absolutely freaking gorgeous! It is a wonderful park for kids with a lot of paved trails, shuttle service so you can’t get lost, and a river to splash around.

Zion, first established in 1919, gets its name from Mormon pioneers who considered it a sanctuary where travelers could experience feelings of awe, immensity, and eternity. Zion is a Hebrew word that means ‘a place of peace and relaxation.

Jurassic-age Navajo Sandstone was deposited in an ancient sandy desert, like the Sahara of today. The desert winds blew the sand into dunes 2,000 feet deep, you see the direction of the winds on the canyon walls. Here you can see some of the largest fossilized sand dunes in the world!

Humans have been living in the park for at least 8,000 years. There are abandoned cliff houses and rock art left behind by the Anasazi people 800 to 1,500 years ago.

In 1909, it was named a National Monument by President Taft to protect the canyon and became a National Park in 1919.

The Upper Emerald Pool Trail is rated moderate and it is 1.0 mile. The trail changes from rocky to very sandy with some steep inclines. It’s not fun walking up-slope in soft sand, but it was beautiful and I can’t wait to go back! The lower pool was barely a pool with a sprinkle of a waterfall above. The upper pool was much larger but looked in need of a good hard rain.

We then walked the Grotto Trail which is an easy trail of 1.0 mile back to a shuttle stop. This trail connects Zion Lodge to the Grotto and combines the Pool trails and Kayenta to form a 2.5 mile loop. 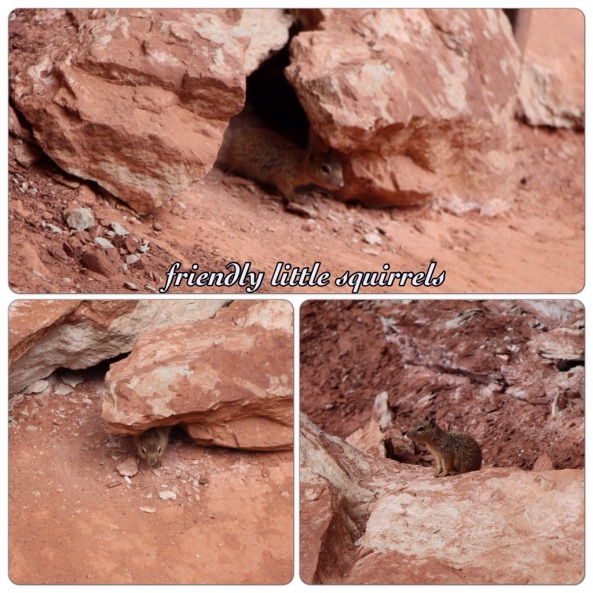 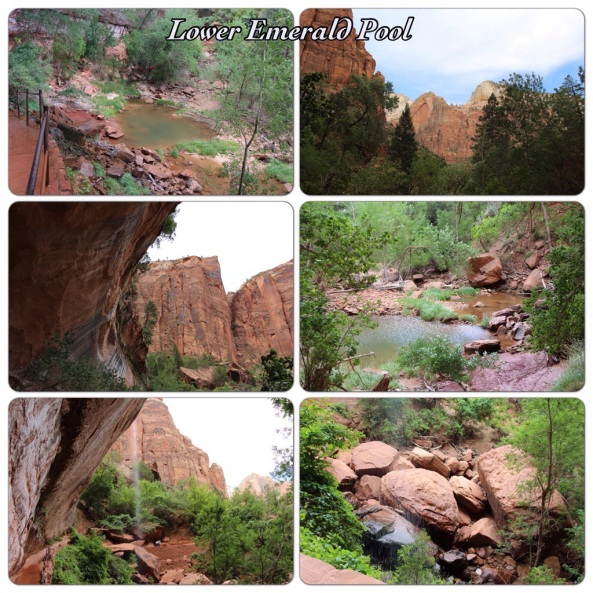 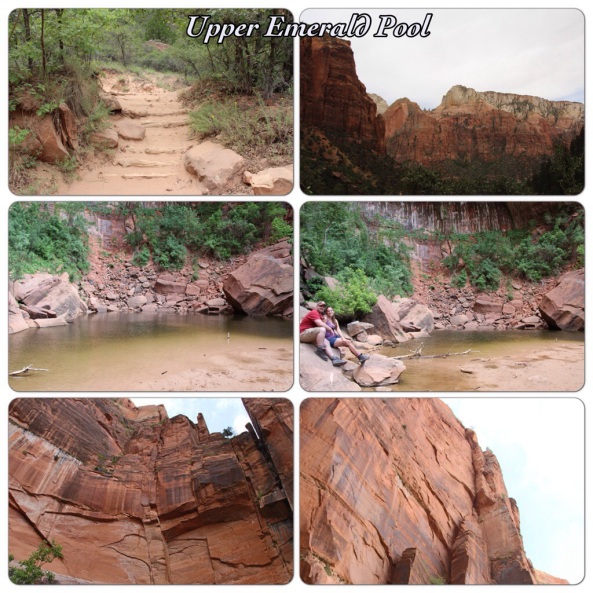 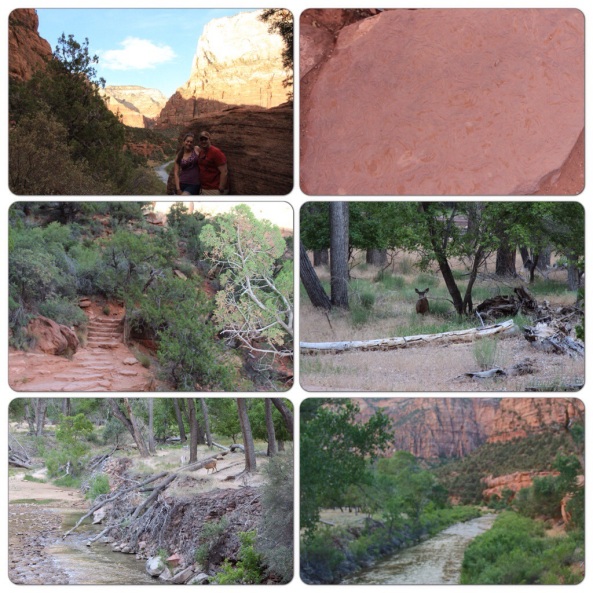 The next day we headed to the Zion Human History Museum which had a lovely movie about the history of the park, it was better than the IMAX and it was FREE! The Riverside Walk was 2.2 miles of paved trails the follow the Virgin River along the bottom of the canyon

Then we drove to Kolob Canyon and reservoir. It was a beautiful drive with a landscape different from Zion yet only an hour away. 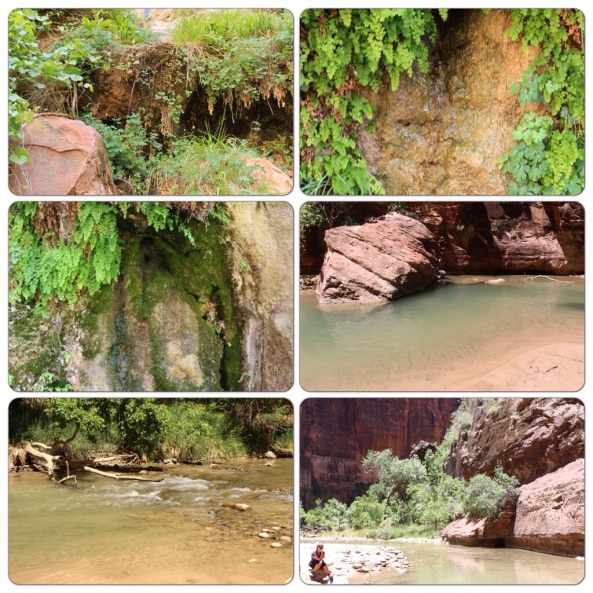 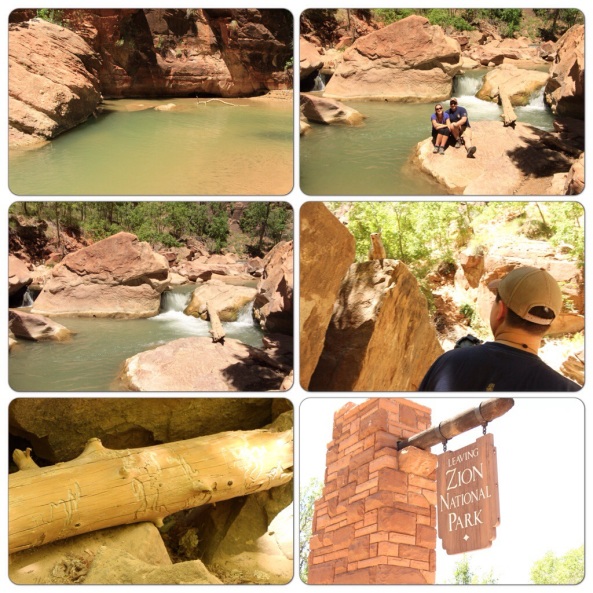 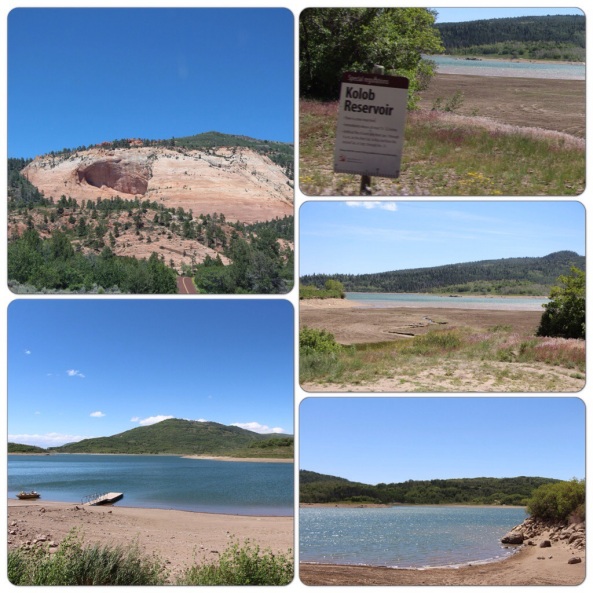 To finish our day we had dinner in Springdale at Oscar’s Cafe. It was very good but the view was spectacular! Springdale is an adorable town we didn’t really have time to wander around but I would have liked to. There are a variety of restaurants and shops all within walking distance from the entrance of the park.