Hi there…greetings from Boston. Aimee and I woke up extra early to head down to Deer Island Park near Frank’s neighborhood. The park has a fantastic bike and walking trail which we took advantage of to burn off some of the calories left over from New York. On the ride, we were able to get incredible pictures of Boston harbor, Islands, and Atlantic Ocean. The island is named because of all the Deer that migrated there after the city of Boston was settled in the 1600’s. Over the years, it was a landfill, sewer treatment plant, and now a beautiful park, quite a change of scenery! 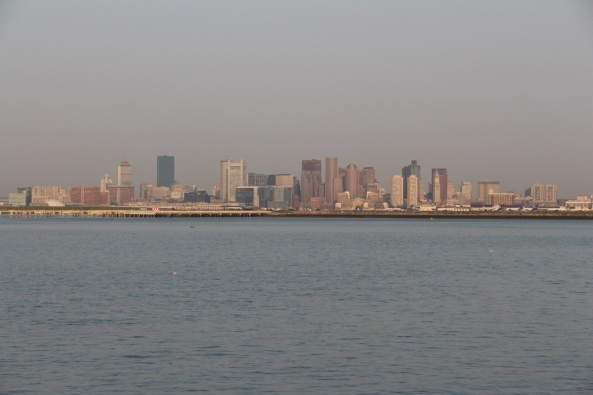 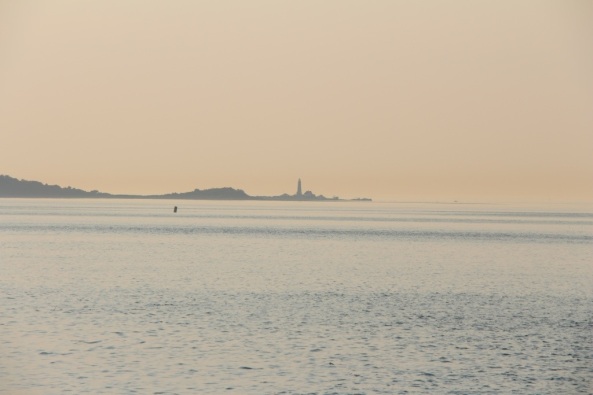 After biking the 3 miles in the park, we headed to one of Frank’s favorite breakfast diners, High Tide Coffee Shop. At the shop, Aimee ordered Egg’s Benidict and I ordered eggs, sausage, and toast. Breakfast was fast and delicious. 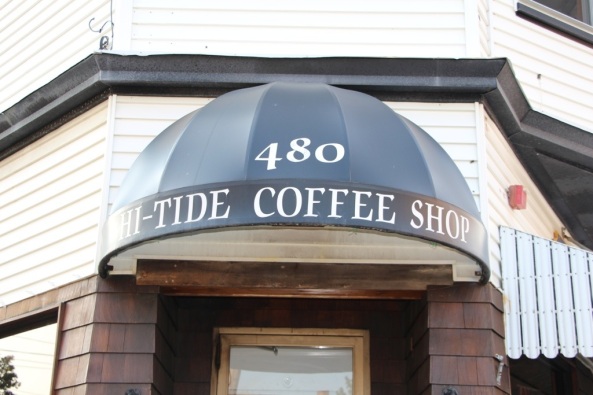 We headed back to Frank’s and got ready for the day. Before hitting the local subway station we stopped off at Showcase Laundry to drop off our dirty clothes. Given the fact we were only in Boston for two days, we decided it would be easiest to have the “wash and fold” service. It was actually about the same price as we paid doing laundry ourselves in New Jersey, pretty convenient.

After the Laundry mat, we headed to the subway. We boarded the blue line and headed for the Aquarium, where we would get picked up by the Old Town Trolley Tours.

We took a hop on, hop off tour of Washington and we enjoyed it so much because it’s the quickest way to really discover a city.

Below is a bridge that was designed to resemble the Bunker Hill Monument. It’s one of the only bridges in the Boston Area (because of all the tunneling that was recently done) and is actually the widest cable bridge in the world. 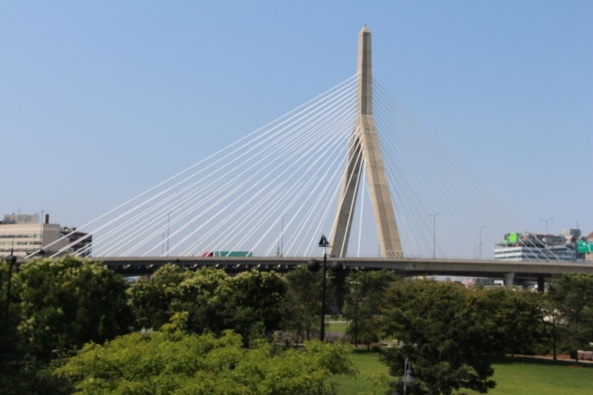 Next stop was the home of the Boston Celtics and Bruins, the TD Garden Center. The statue below is a statue of one of the city’s favorite Hockey players. I can’t remember his name, but the story goes that he scored a winning goal in a championship game. While he was celebrating, someone tripped him and he went horizontal. The photographer snapped a picture and it is this picture that you can find in many Boston Pubs.. 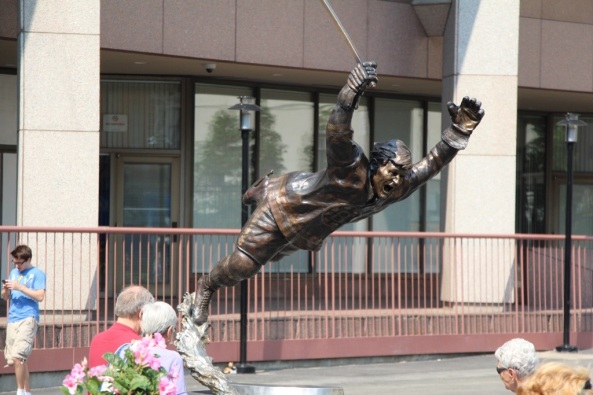 Below is a picture of Boston tribute to the lost lives during the Holocaust. There are chimney’s of the six main concentration camps. They are actually lit and white smoke can be seen coming out. 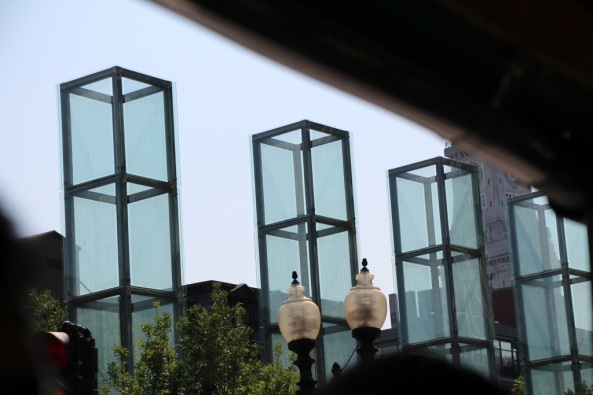 Next stop was Boston Common. This is the largest green space in the city. It was created back in the day as a green space for cattle and other farm animals. Bostonians were complaining about the stench of manure in the air so government officials set aside the 50 acres known as Boston Common. It is common to take a swan ride on the pond but unfortunately we didn’t have enough time. The globes below actually line most of the perimeter side walks, they were an art display for the summertime.

Aimee got a kick out the kids and mother below, this gives a kid’s leash a whole new meaning 😀

Around the corner from the common was the outside of the Cheers Bar. Aimee and I are huge fans of cheers. I don’t know what it is but most of the shows we watch center around a group of friends with most of the show taking place in a bar..go figure. We were told not to go inside, instead there’s a replica of the bar closer to our starting point. 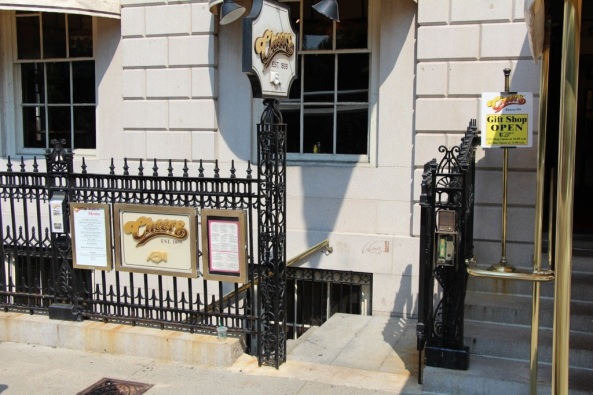 Boston has a ton of old churches. Below are a few that liked. The second church below is home to the Christian Science Church and was started by a female Bostonian in the 1800s. 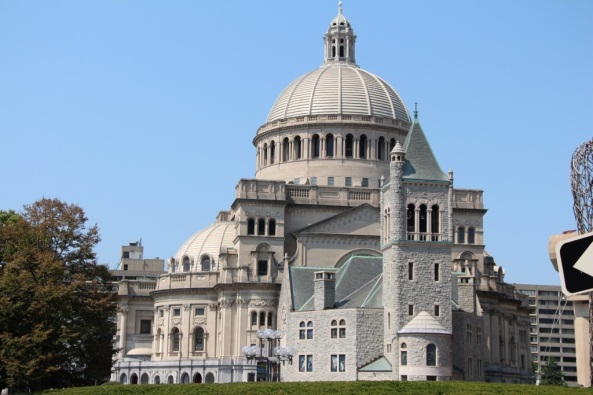 By the 8th stop, there was farmer’s market. We said we would stop off tomorrow and explore since we were almost out of time today. Later we found out it was only open Tuesdays and Saturdays..here are some sunflowers shot from the moving trolley..

Next up is a picture of a Boston Fire Station. What’s interesting about this station is it’s actually in a federally protected neighborhood. The station was built back in the day when fire trucks were actually pulled by horses. You can notice the arches are pretty small for today’s common firetruck. The city of Boston actually had to hire a company to design smaller firetrucks so that they would fit under the arches of this station. These smaller trucks are able to get around Boston much easier than the larger ones.. 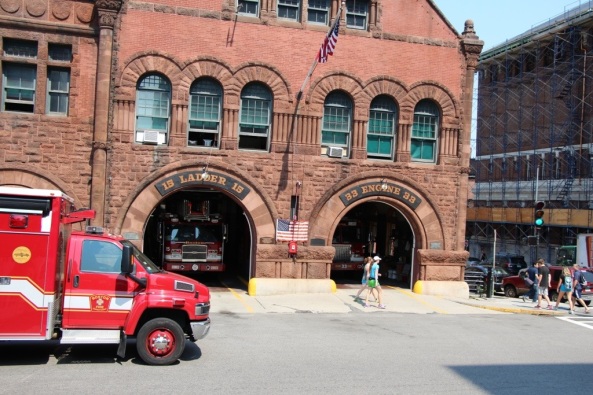 Next stop was the infamous Fenway Park. Aimee and I didn’t have time to tour, but we got some good shots from the trolley..

One thing we learned on the tour is that Boston is home to the most colleges in the world. There are over 50 colleges in the greater Boston area. Some of the more famous ones are MIT and Harvard…I didn’t know that.. 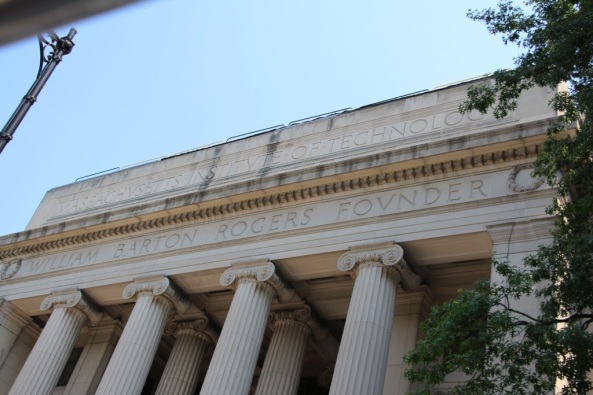 This next building is the current state capitol of Massachusetts. It’s has a golden dome that is actually made of gold leafs…it really sparkles in the sun.

Our next stop was the Boston Tea Party Museum. I wanted to tour the replica ships and museum so we hopped off of the trolley and bought tickets. The tour was great, actual revolutionary characters toured you around the grounds. We were disguised just like the Tea Party Patriots the day with feathers and we actually were able to throw tea crates overboard…Hiizzzaaa! Aimee and I were both given characters that we would play during the tour as well. My character actually died during the Boston Tea Party. He was in the bottom part of the ship tying up the crates of tea to the block and tackle system. A crate of tea came loose and fell on him and he died immediately. Given the fact that a treasonous act was ongoing, the patriots hid him in a carpenter’s shop under a pile of saw dust, an ideal burial of a former carpenter! Aimee’s character actually stole a bit of the tea and stored it in his boot. He passed it on down to his future generations to remember this patriotic moment. First we toured the ship, the Eleanor. It was a replica built to scale of a merchant ship. My first thought was how could you sail the oceans in this small vessel… 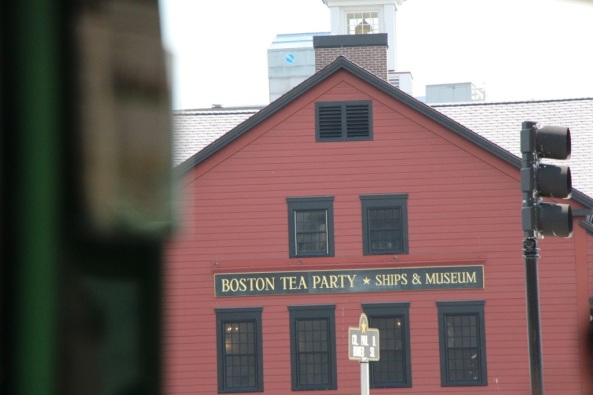 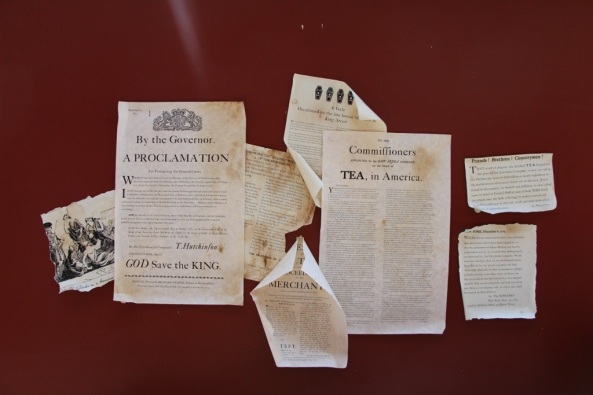 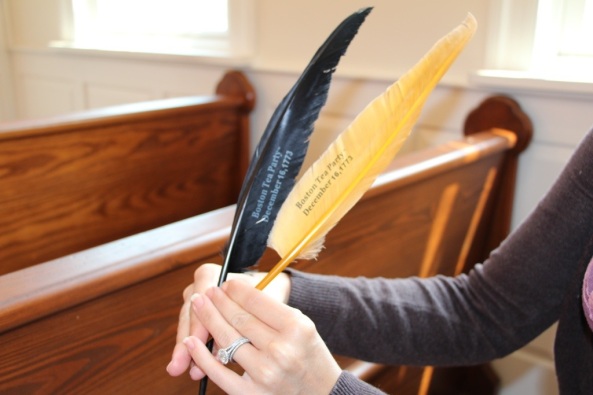 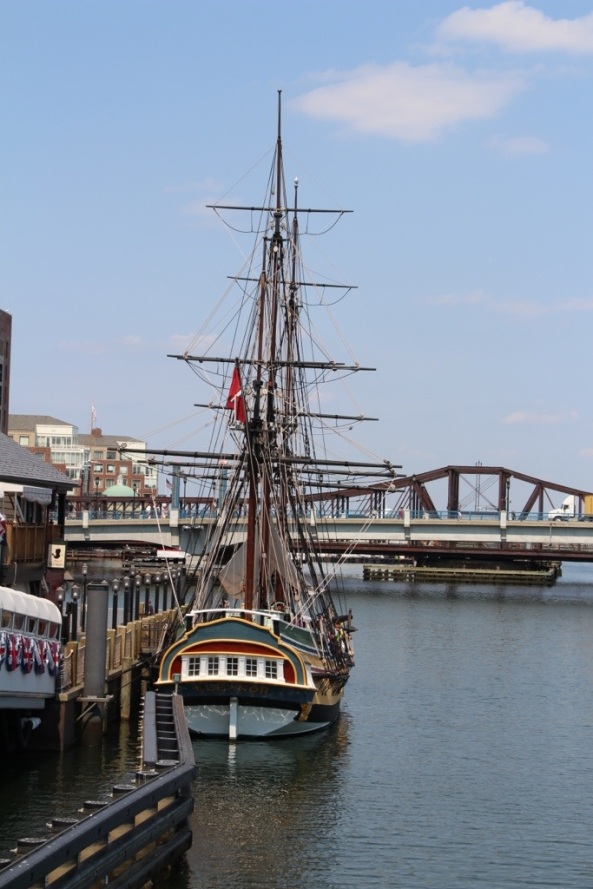 The next part of the tour was more somber it was all about the effects of the Boston Tea Party. It walked you through the next 16 months until the Revolutionary war was begun. The museum actually had a left over tea crate on display. The store goes a young boy found the crate washed up on shore and brought it home to his mother and father. They stowed the crate away and passed it down to future generations. One of the daughters actually used the crate to house her dolls and other children wrote on the box and played games similar to Tic Tac Toe. Unfortunately, we weren’t allowed to take any pictures. The toured finished up a great movie that made you proud to be an American.
After the Tea Party Museum, Aimee and I boarded the trolly and headed back to our first stop. We got off and found the replica Cheers bar. Of course, we had to stop in and grab a brew. 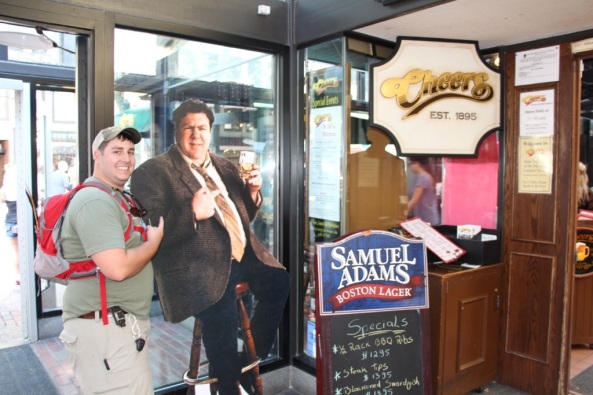 Aimee wanted to visit the North End to go to an Italian Bakery that Frank had recommended. We boarded the trolley and headed to stop 2. We got off and walked around the North End and found Paul Revere’s house. Revere was the Sons of Liberty Courier who is famous for his Midnight Ride to Lexington to announce the “British are Coming”. 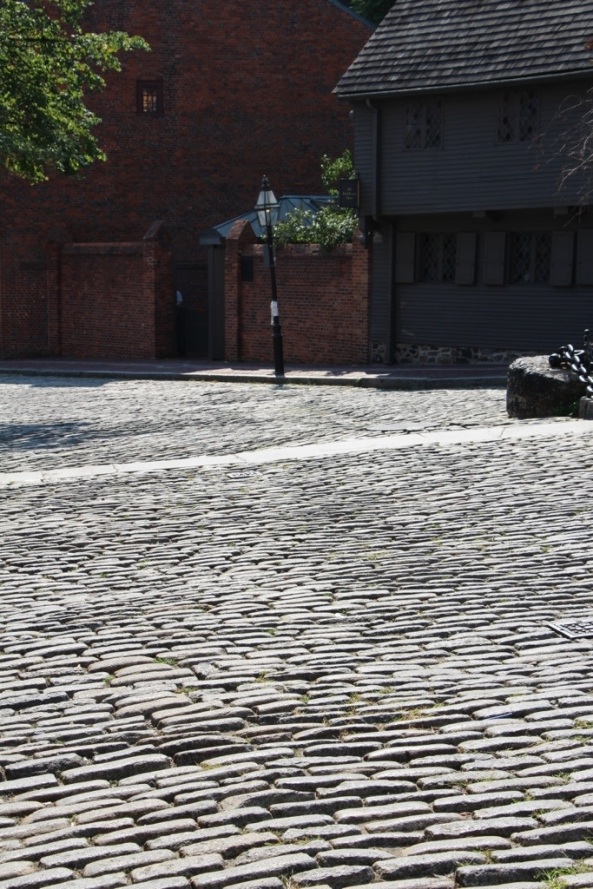 After we headed to Bova’s Italian Bakery. We were both in awe at all of the goodies they had in the shop. Aimee had trouble deciding which treat to get, so we purchased a little bit of everything. We tried a Peanut Butter Cannoli, an Italian Cannoli, a Creme Lobster Tail, four italian cookies. Everything was delicious! 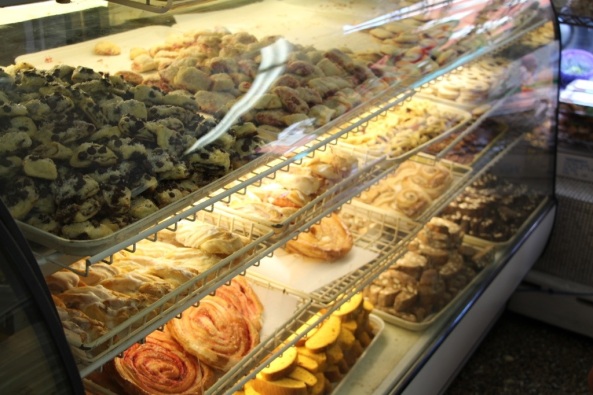 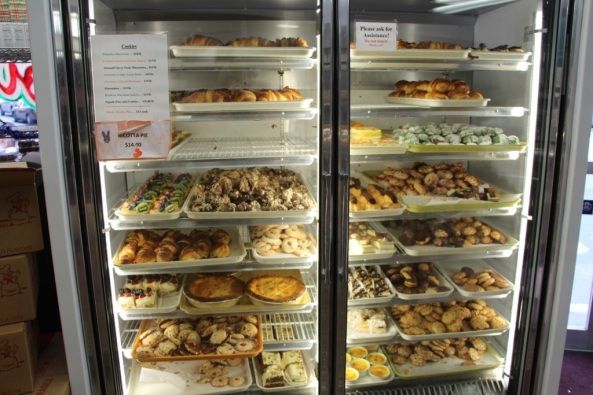 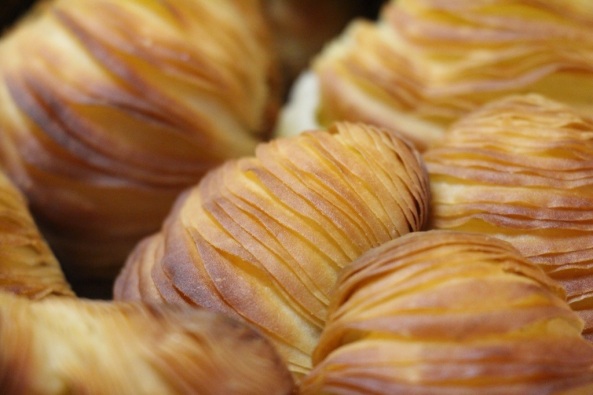 After touring the North End, we got back onto the trolley and took it shopping area where we got off and got onto the subway to head home. Below is a subway station, it’s actually the oldest subway station in the world and is still working to this day..

We returned to our vehicle and stopped off a the laundry mat to pick up our clean clothes..nice and convenient!

We returned to Frank’s and chilled out for the evening. Well that’s all for today’s busy day in Boston, until tomorrow..Bon Soir!