I’m writing this post tonight with a headache induced by a chocolate intoxication, which doesn’t really seem like a bad thing. This morning we woke up and started packing up to move on to Hershey, PA. Our campground in D.C. was really nice, I would recommend it to anyone. It had everything you would think a campground should have plus so much more… a ridiculous amount of washing machines and dryers, cafe, huge swimming pool, huge kiddie pool play area, huge dog walking area, free shuttles into Union Station, shade, and many large clean bathhouses.

We didn’t really have any shade, but other people did and I didn’t want to ask to move because we weren’t staying very long.

Groups of campers from around the country we here too. I thought it was funny to see, it must have been college groups or something similar because they were piled into the same type of van we used at UNO to travel to other states, but they all had the same tent it was crazy. Maybe they had a sponsor, or just more money for the program than we did.

There is a beautiful bed of flowers in front of every bathhouse.
Now, we’re moving on out…(singing it)
Only a 2 hour drive to our next campground. On the way, of course we had to stop at the rest area to take a picture.

They have really pretty flowers at the PA rest stop.
We raced over to the campground to unhitch, eat lunch, and walk Roux. Then it was on the Chocolate Town! 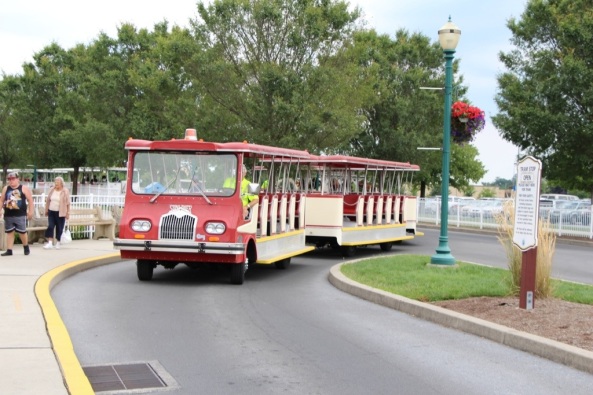 There is free parking if you’re only going to the Chocolate World and not the Amusement Park. So we parked for free, yippee! An then took a trolley to the entrance. 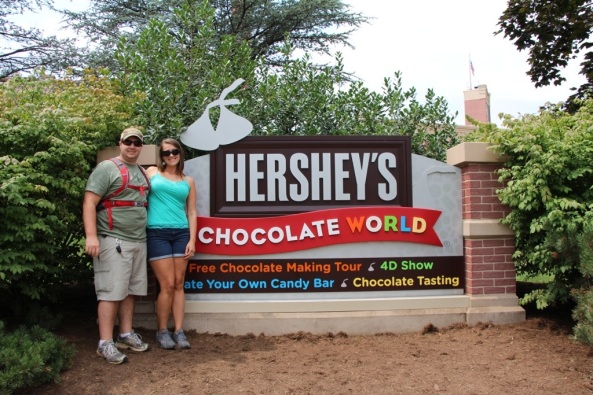 I was so excited to be here! I love chocolate!

<a
You can buy a whole lotta candy here man! Reviewers on tripadvisor said that they had really good deals on candy, but it's not true. Unless, the candy where they live is more expensive, I don't know. We bought hershey bars for smores then went to the grocery store for hotdog bun and they were cheaper there. Maybe it's different on bulk items. They also said that the chocolate tastes better, and Jacob and I both agree on that one. It must be because its made so close then sold quickly. You never know how long the stuff at wally-world or a local grocery back home has been on the shelf.

We bought the chocolate enthusiast tickets which included, 4-D movie, trolley tour of the city, chocolate tasters class, make your own candy bar lab, and a free ride on the history of hershey chocolate. 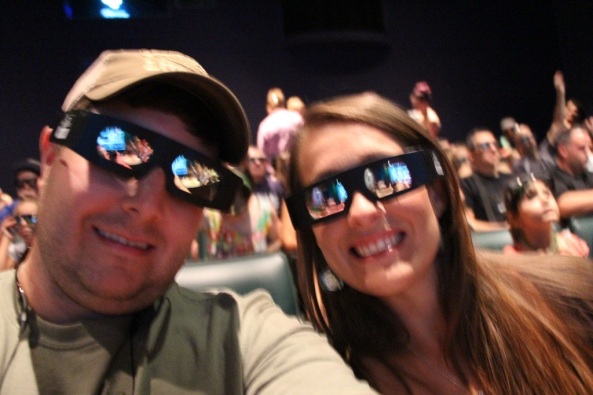 Wanting for the 4-D experience to start. This was similar to Disney’s Bug’s Life in the Animal Kingdom. They have nothing on Disney though, this movie wasn’t great. What was great was all the children in the movie! The staff members got a few kids to participate in the movie it was ADORABLE! At the end they give you chocolate! Next, our class on tasting.

Our “teacher” spoke really fast, like he had an exact amount of time to get everything in and he was already running late, it came out all mumbly to me. I did really like tasting the chocolate, it made me happy and forget about the fast talking for a bit. The five types on the paper above are the ones we had. 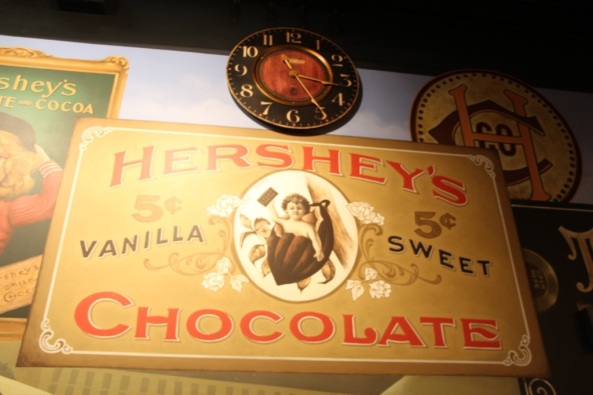 Next, the history of Hershey chocolate ride. This was a little bit cheesy with cows sing, but I liked it and I think kids would too. They tell you all about the production of chocolate from start to finish and show you what the machinery looks like behind the scenes. 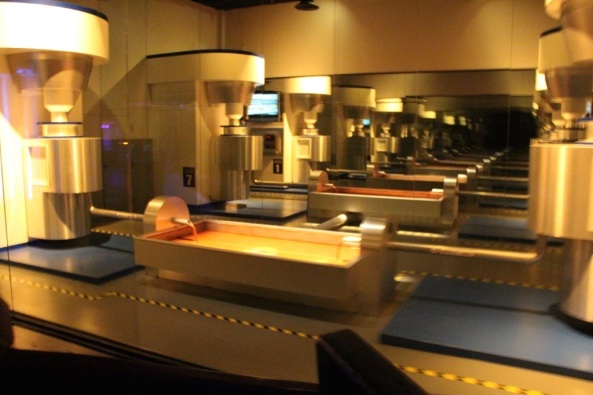 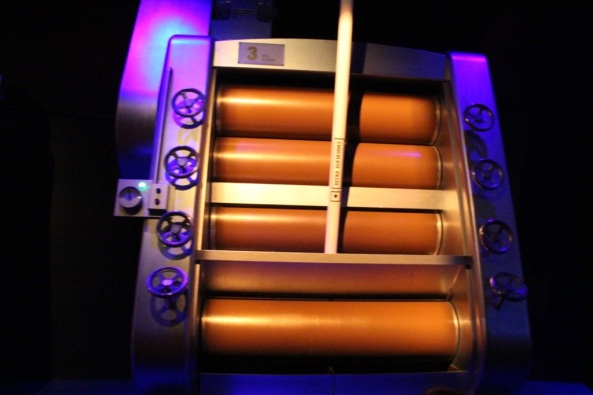 And they give you chocolate at the end!

This is what the trash cans look like here.
Next we boarded the trolley to tour the town of Hershey. 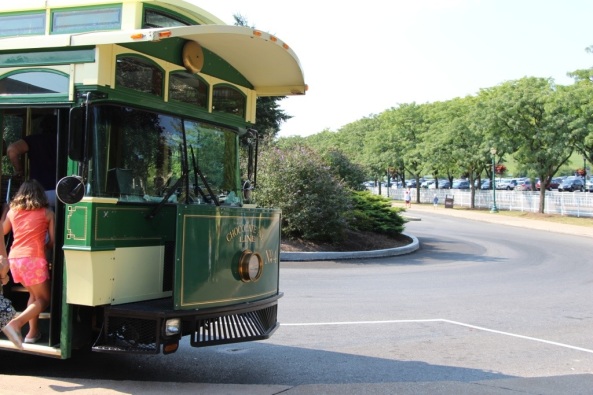 On this 45 minute ride, there are 2 conductors would tell you about how Mr. Hershey started his empire and what has happened with everything when he passed.

Oh, and they sing…it was cute and informative. We enjoyed learning about how this man, who went bankrupt in the beginning, became a household name with the Largest Chocolate Factory in the World! That’s pretty amazing! 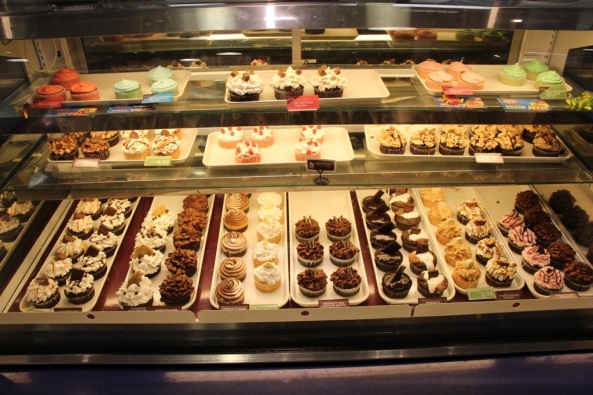 There is a big food court with a bakery.
The last thing we did here was make our very own candy bar. They make you get all dressed up like you’re really going to be making something. Unfortunately, everything is complete done with machines. It’s cool to watch though.

The first thing you do is choose what type of chocolate you want and what you want to be inside on a computer.

This is my “OMG it smells like chocolate in here!” face.

“I’ve got the golden ticket!” All you candy info is programed on this ticket. You just scan it and watch the magic happen.

The fillings get added. He had pretzels, almonds, and chocolate chips. 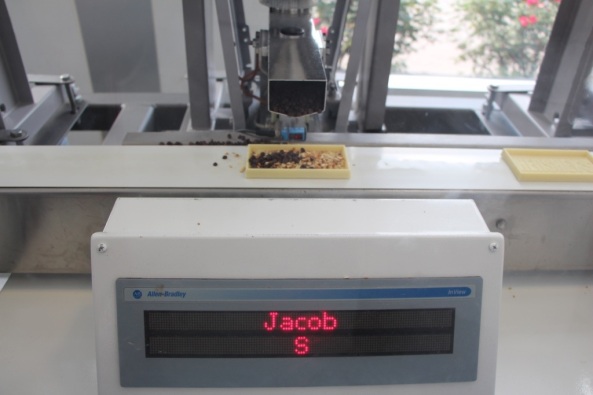 While you wait for it to cool, you get to design your chocolate bar wrapper. 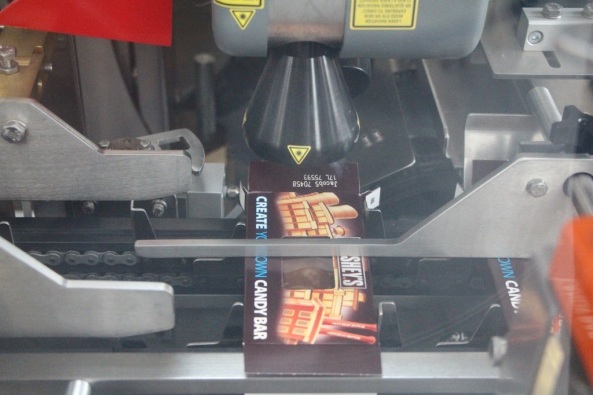 There is a laser that prints the name on each of the boxes, lightening fast.

Voila! It’s done.
Like I said before, we bought some hershey bars to make s’mores after dinner then stopped to get some buns.
Back at the campground, Jacob made a really good fire. We have been having horrible luck with wet wood at every campground and our fires have been giving us a rough time. Well, tonight he did me proud with some dry wood. We were enjoying our dinner waiting for the night sky to roll in when, wouldn’t ya know, it starts freaking raining! We sat in the rain until our hotdogs were ready to eat and even ate them in the rain. We’ll try again tomorrow night with the s’mores. We had enough candy today, who needs s’mores after that anyway! On to Philly tomorrow. But first, I forgot to include few pictures. The street light are capped with kisses in town. 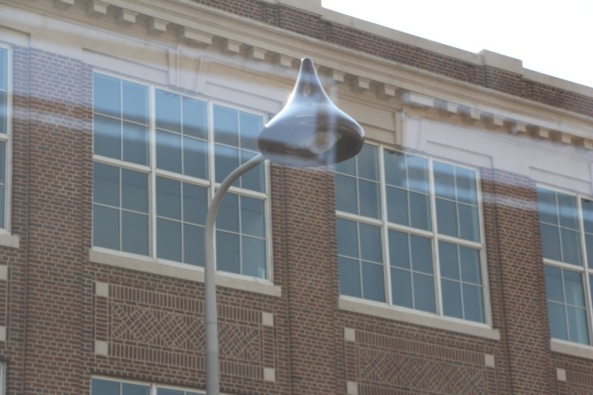 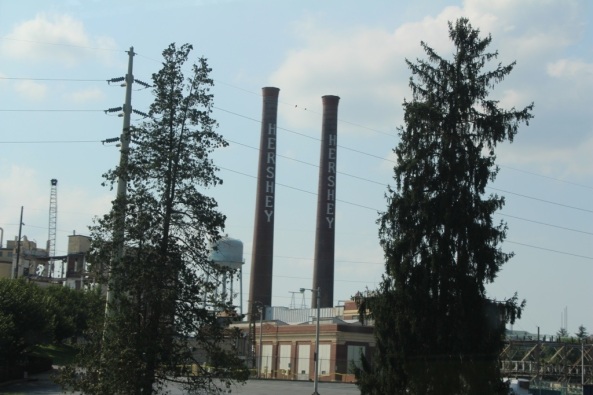 The “Largest Chocolate Factory in the World!” 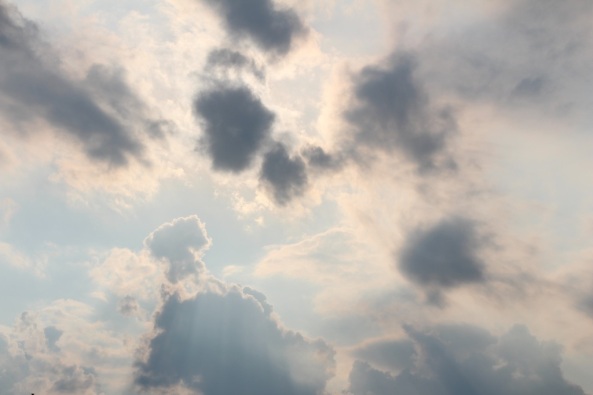 The suns rays shining through the clouds.